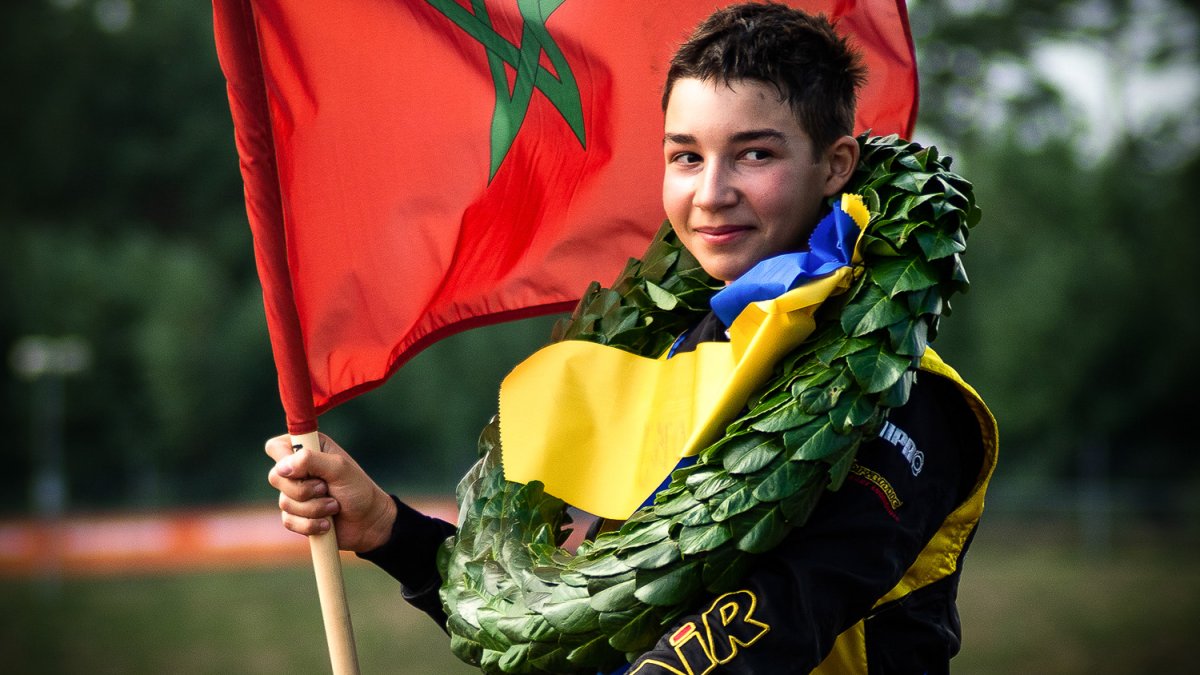 The young Moroccan driver Suleiman Zanfari surprised everyone by winning the Swedish OK-Junior Championship at Kristianstad on the last weekend of July. The meeting had started with average results in Qualifying, but Suleiman and his team were able to recover the situation in the rain in the Prefinal before concluding with another victory after a hard fight in the dry Final.

There was high emotion on Sunday 28th July at the Åsum Ring when Suleiman Zanfari crossed the finish line of the OK-Junior Final. It must be said that the young Moroccan hopeful was not one of the favourites on the entry list for the Swedish Championship. His incredible recovery on a very slippery track in the Prefinal, and the confirmation of his talent during a long battle in the Final, earned him the applause of the public and the congratulations of the experts. Faced with the most experienced Swedish drivers in international competition, Suleiman showed great strength of character to win the Swedish title with two consecutive wins in the Finals.

A difficult start to the meeting

On a track he knows and appreciates, Suleiman did not display his usual level of performance, that had led up to his 8th position in the Final position in the FIA Karting European Championship – Junior in June. 10th in Timed Practice among the 28 participants in the competition, he was struggling with a deficit of about 3 tenths of a lap without finding a solution in the Qualifying Heats. He managed to gain three places on Saturday night at the wheel of his Tony Kart / Vortex from the Swedish team Ward Racing.

Technical challenge before the finals

Frustrated by the average results of their driver, his coach Davide Foré and mechanic Gabriele Bassetta changed their approach and reconsidered the set-up of his machine. Their reflection bore fruit and Suleiman’s kart found a new equilibrium as the Finals approached, with the title to be decided on the raw result of the Final.

Celebration in the rain in the Prefinal

The Prefinal was held on a wet track with very limited grip. Suleiman started aggressively and was already 4th after the first corner. He progressed steadily over the course of the laps and was fighting against one of the favourites, Philip Victorsson, with the two drivers passing over and over again. Suleiman was the winner of this incredible fight which stunned the observers.

Most of his opponents thought Suleiman had been lucky in the rain, but would be less comfortable once the track was dry again for the Final. Thanks to the work of his team, however, Suleiman had strong prospects of surprising them. The fight was again intense and undecided until the finish. Early in the race, Casper Jansson and William Siverholm attacked and he found himself 3rd..Extremely determined, Suleiman kept up the fight and recovered the lead at halfway. He then had to keep calm to resist Wernersson’s threat right behind him. Suleiman remained focused, made no mistakes and crossed the finish line as a major winner to clinch his first Junior title.

“It’s a great satisfaction for me to put my name on the Swedish Championship trophy,” said the young OCK driver. “It is of course surprising to see a Moroccan win in Sweden, but I think I deserve it. I dedicate my first international title to His Majesty Mohamed VI, king of Morocco and to the Moroccan people. After my victory, the warm reaction of the Swedes touched me deeply, especially within the team. I would like to thank Joakim Ward for the quality of his team’s work as well as Gabriele Bassetta, my mechanic, who made the right decisions for the Final stages in close collaboration with Davide Foré”.

“The better I get to know Suleiman, the more he surprises me!”, confided Davide Foré. “We had to deal with some poor performances since the last European meeting at Le Mans and it was certainly not easy for him to experience. I always said that the driver was not the cause. At Kristianstad, we were able to provide a technical answer along with Gabriele Bassetta just before the Final stages.Thanks to a more competitive kart, Suleiman was able to mobilise against the top Swedish specialists. He performed remarkably well in the rain without ever making mistakes despite pressure from his rivals. In the Final, he kept his cool to apply the right strategy and stay ahead of a formidable opponent. I am very happy with his performance, and I am not the only one!”

Suleiman will now travel to Belgium and the Genk circuit to race in the DKM before starting his preparation for the World Championship to be held in Finland in early September at Alahärmä.