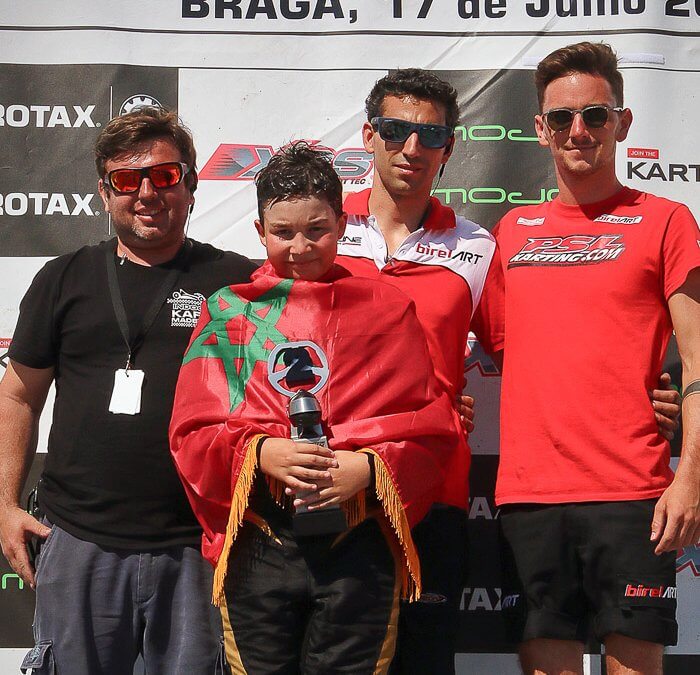 Although Portugal in the middle of July was undeniably holiday time, Suleiman Zanfari had not come to Braga to rest. The young Moroccan hopeful continued learning the business of a driver and his discovery of karting circuits around the world this weekend. This time he raced in the Portuguese Trophy in the Rotax Mini Max category. 2nd in the final standings of the category, he stunned most Portuguese present by assimilating the intricacies of their favourite track quickly.

At 11, Suleiman Zanfari has honed his experience as a young driver participating in a variety of karting competitions around the world. A week earlier, he faced the rigours of the Swedish climate and had a very interesting time in the Swedish Championship at the Kristianstad circuit watered by rain. It was a radical change of scenery in Portugal during the weekend of July 17th with temperatures exceeding 40 ° on the Kartodromo Internacional de Braga, scene of several European and World championships. Suleiman once again learned a very technical track in the Rotax Max Challenge Portugal. He also had to get used to a new brand of chassis and a new team in Birel ART Portugal. He enjoyed the opportunity for guidance from an experienced driver in the person of British champion Jordon Lennox-Lamb.

“I got straight on with it with Jordon,” Suleiman said. “He understood very quickly how to help me improve my performance. The circuit was however not easy to learn, but I was immediately on the pace.” A special feature of this meeting was that the engines were drawn to ensure sporting fairness. Suleiman was assigned engine No. 17, the same number as one of his idols, the late Jules Bianchi.

Indeed, from free practice onwards, Suleiman was repeatedly at the top of the timesheets, ahead of the Portuguese drivers who were rather surprised to see a young Moroccan rival up to speed to quickly. His fluency was confirmed in Qualifying with a nice 2nd place five hundredths from pole position. He then battled in the top three in Race 1 and set the fastest race lap before taking 3rd place on the finish line. Suleiman to attacked the leader at the start of Race 2, but lost a few places before rising to 2nd at the chequered flag. Starting 3rd in the last race, he seized 1st for a moment before finishing again in 2nd place. As consistent as he was fast, he found himself level on points with the winner who finally took the lead in wins.

“It’s very satisfying to finish 2nd in the event,” concluded Suleiman. “I think I have reached a new stage this weekend with Birel ART. I am delighted with my collaboration with this great Italian brand and Jordon and I thank them for their understanding and effective help. I am more motivated than ever for the rest of my race programme.”

There was a visible jump at Braga and the future results for the young Moroccan driver are eagerly expected to improve, starting with the Rotax Max Challenge Spain on the Motorland Aragon circuit in less than two weeks.