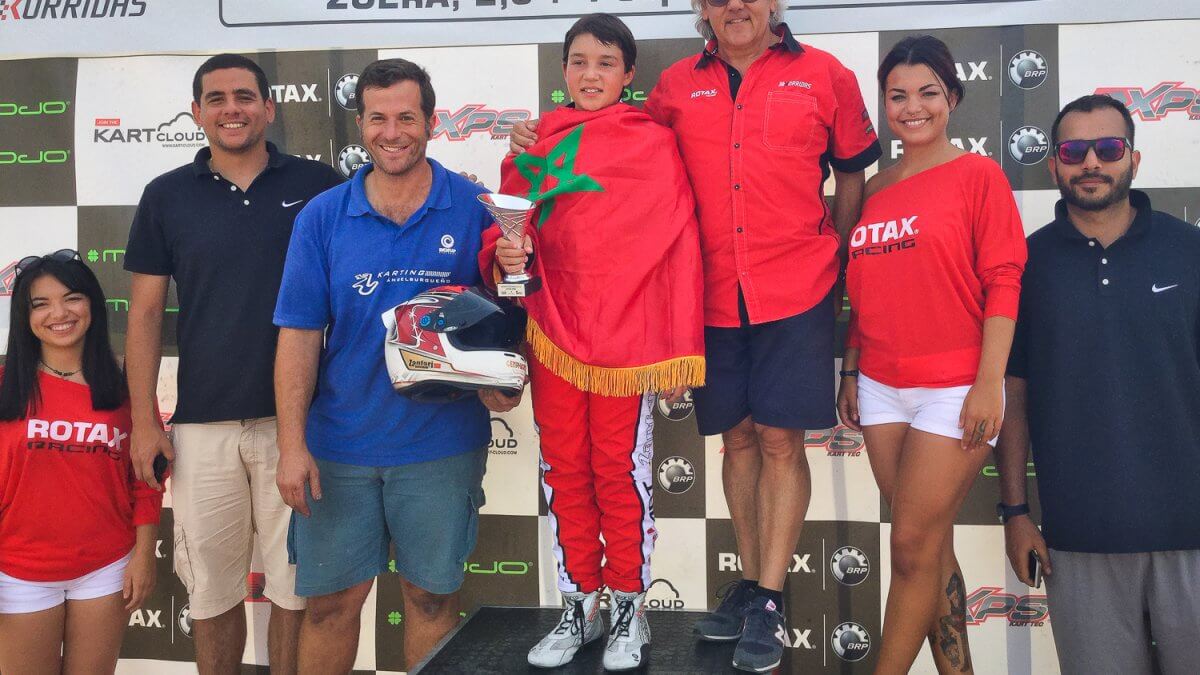 The performance of the young Moroccan hopeful Suleiman Zanfari at the Rotax Grand Festival has once again confirmed the progress made this summer in international karting competition, where Suleiman continuously records good results and hasn’t been off the podium. He has just completed a weekend full of unexpected events in 3rd at the Spanish circuit of Zuera. Learning new tracks, driving different karts within various teams while continuing his march forward is currently the strength of young Suleiman.

One of the most important events of the season, the Rotax Grand Festival, took place this weekend on the long circuit of Zuera (ESP) in the region of Aragon, organised by Armando Freias Korridas e Companhia. The 1700 m of this famous track forced him to take into account for the first time the slipstreaming synonymous with high speed. On this occasion he drove a Birel ART kart with Team Burgueno. Following in the footsteps of his elder Sami Taoufik, Suleiman is now in training, physically and mentally, with an expert, the Venezuelan Pasquale Rosania.

Thus the 11-year-old Moroccan driver faced the Spanish competition with a winning spirit. While he was a long way behind in the first practice session, Suleiman was quick to assimilate the peculiarities of the track. He adapted to the slipstreaming phenomena with astonishing ease, wisely choosing drivers able to accompany him up the rankings. He started a second a lap off the best and finished with the fastest lap in the Final. These are figures that speak for themselves.

Already in 3rd position during official Qualifying, Suleiman kept the pace in the remainder of the qualifying heats. He was then disqualified with other team members in the first heat for a reason that didn’t involve him. Not upset by this injustice, he secured a beautiful 3rd place in the second heat. Despite a cheerful outer appearance, Suleiman surprised his opponents with his fierce fighting on the track.

He started the Prefinal in 9th and joined the top three on the finish line, recovering the delay caused by the previous sanction. He was still fighting with the best in the Final, set the fastest time and was again on the third step of the podium.

“I am delighted to be on the podium at Zuera because the circumstances were not really with me,” Suleiman said. “I was able to learn the intricacies of slipstreaming at high speed, and in the end, I liked it! It is a strategic point that I’m pleased to master. The result could have been better in other circumstances, but 3rd position suits me fine for now. I’m still in the learning phase and it’s currently still essential for me to enrich my experience.” This will happen in a few weeks in the UK, as part of the final of the Super One, the benchmark British competition.